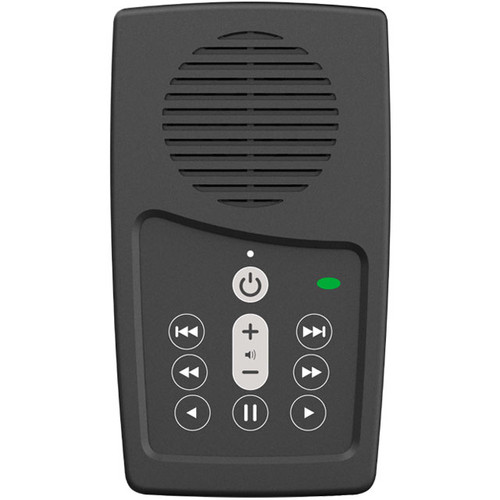 Features:
• New American Bible - Catholic Audio Bible player
• Both Old Testament and New Testament
• Typical battery playtime under normal operating conditions: 5 – 14 hours
• Raised buttons to easily navigate forward and backward between each book and each chapter of the Bible
• As you navigate, the Audio Bible will talk back to you and tell you exactly what book and chapter you are on
• Bookmarking button allows you to stop the unit, then return later to the exact place you were listening to before
• Small fits in shirt pocket, 4 inches high, 2 5/16 inches wide, 1/2 inch deep
• Rock solid construction, water resistant, operates in harsh environments
• Each chapter is on its on individual track so you can select the exact book and chapter you want to listen to.
• Includes Audio Bible player, built in rechargeable battery, built in speaker, earbuds, (electrical wall charger and solar panel) to charge the battery, manual

Translation Information:
• NAB Catholic Bible - New American Bible Translation
• U.S. Bishops have endorsed it for use in the Catholic Church
• The Catholic Bible is composed of the 46 books of the Old Testament and the 27 books of the New Testament.
• Number of Translators: 50
• Old Testament published in 1970 with Psalms and New Testament published in 1991
• The official translation used in the Mass of the Catholic Church in the United States, this translation began in response to Pope Pius XII’s famous encyclical on scripture studies in which he encouraged clear Bible translation combined with skilled literary criticism of the text. Translated under the direction of The Catholic Biblical Association of America.